A Vacuum tube (electron tube) is a glass or metal enclosure in which electrons move through the vacuum or gas from one metal electrode to another. The vacuum tube is often used to amplify weak currents or act as a one-way valve (rectifier) for electric current.

Vacuum tubes work very similarly to a hydraulic valve in that electrons flow through wires or a vacuum much like the flow of water in pipes. The electric potential, more readily known as voltage, pushes the electrons across the wires or vacuum much like gravity forcing water to flow through pipes. The valve in this analogy is the grid of a preamp or power tube. The valve has the ability to control the flow of electrons by exerting a potential (negative or positive voltage) against the electrons either inhibiting to encouraging the flow.

The most basic of vacuum tubes is the diode. A diode has two terminals and these are the:

In guitar amplifies diodes are most commonly used in the power section and their purpose is for rectification i.e. conversion of AC to DC. 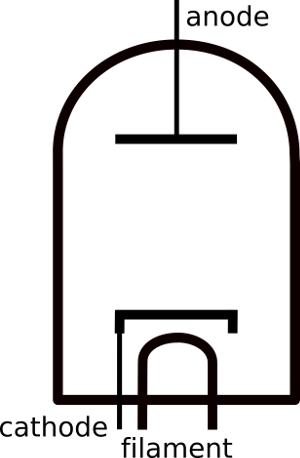 A triode is the same as a diode but in addition has a third terminal called the grid. This terminal is placed between the cathode and anode and acts much like the valve in the water flow and hydraulic valve analogy. When the electric potential (voltage) of the grid is lower than the cathode then electrons emitted from the cathode are repelled and don't reach the anode. If however, the grid is positively charged then the electrons flow freely to the anode.

In guitar amplifiers the grid is where the guitar signal enters. The voltage applied against the grid (guitar signal) will fluctuate between negative and positive and result in the flow of electrons between cathode and anode matching the input signal. If the triode is being used for amplification then the voltage flowing from anode to cathode will far exceed the input voltage (a gain increase i.e. amplification of the input signal)

Triodes, in guitar amplifiers, are most commonly used in preamp stages and phase inverters. 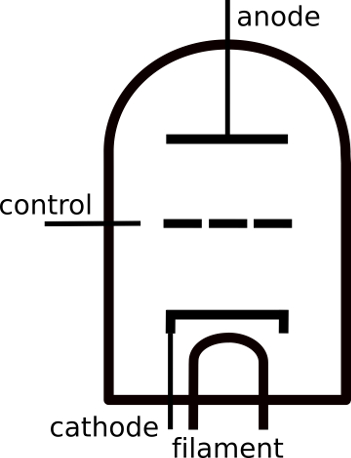 A tetrode is much like a triode but has a fourth electrode called the screen. The screen is positioned between the anode and the grid and its purpose is to reduce capacitance that is generated between the grid and anode. Capacitance occurs due to the fact that there is air space (no direct connection) between grid and anode resulting in a build up of charge. This can result in instability and oscillations (in guitar amplification this can cause squealing or motorboating sounds). The screen will normally be setup with a voltage higher than the cathode and grid but lower than the anode will act as an electrostatic screen between the grid and the anode. This will result in less capacitance and more stability.

In guitar amplifiers tetrodes are not as commonly used. The purpose of the screen is to reduce capacitance, instability and increase efficiency. 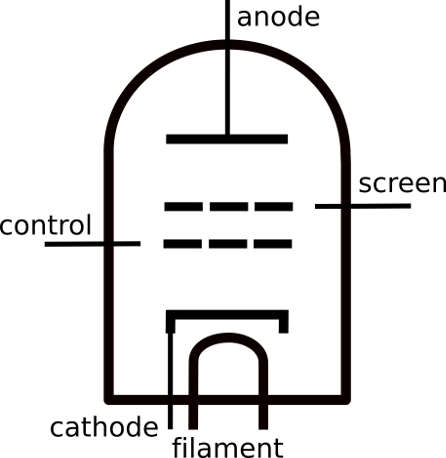 A pentode is similar to a tetrode but with a fifth electrode called the suppressor. The suppressor is positioned between the screen and anode and is used to stop electrons which have reached the anode and have enough energy to bounce back (secondary emission) from the anode towards the grid resulting in instability and oscillations. The suppressor is generally connected to the cathode thus providing a negative charge which will repel the electrons back to the anode. The result of which is a higher amplification factor and ability to work at higher frequencies.

In guitar amplifiers it is common to use pentodes in the power amplification stage. 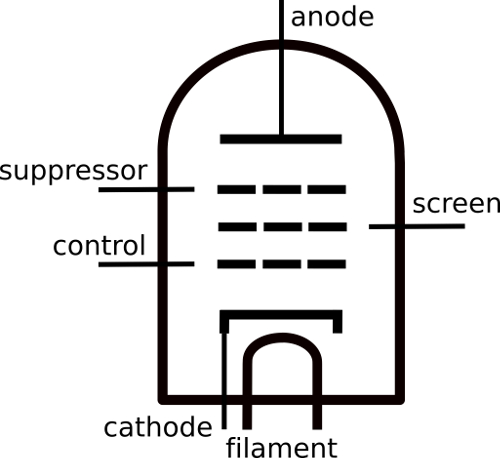